Watch: The Seven Sorrows of the Blessed Virgin Mary w/ Bishop Boyea | The Piercing of His Side & His Death 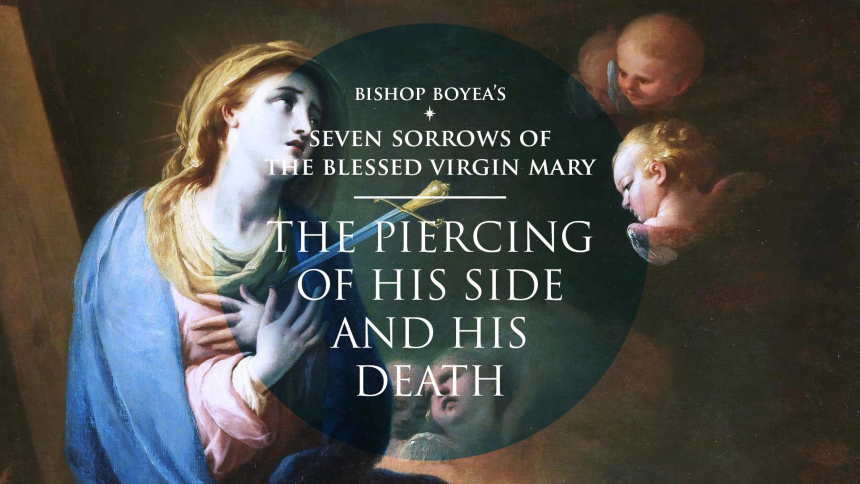 Today is the Feast of the Exaltation of the Holy Cross. Happy feast day! This is the day the Church celebrates both the discovery of the true cross in Jerusalem by Saint Helena, mother of the Emperor Constantine, in the 4th century and the recovery of the same cross in the 7th century after it had stolen by the King of the Persians.

Fittingly, Bishop Boyea today reflects upon the death of Jesus Christ upon the Holy Cross and the piercing of his side. This is the sixth of the Seven Sorrows of the Blessed Virgin Mary. Tomorrow we celebrate the Feast of Our Lady of Sorrows. Here is what Bishop Boyea has to say:

The Book of Genesis predicted this victory: “I will put enmity between you and the woman, and between your offspring and hers; they will strike at your head, while you strike at their heal” (Genesis 3:15). The death of Jesus, the piercing of his side, and his being taken down from that cross did not look like a victory, but it was. And Mary was fully a part of it.

“But when they came to Jesus and saw that he was already dead, they did not break his legs, but one soldier thrust his lance into his side, and immediately blood and water flowed out” (John 19:33-34). Two hearts were pierced, his and his mother’s, just as Simeon had predicted so many years before.

There is a beautiful statue in St. Peter’s Basilica in Rome carved by Michelangelo called the Pieta. Mary is cradling the corpse of her son. Had John already taken Mary to his home or had they both stayed for all these final actions? I think Michelangelo captured the truth. Mary stayed to the bitter end. Yet, in her heart she knew this was not the end and that the end would not be bitter but victorious.

Sisters and brothers, Mary throughout her life carried in her body and soul the sufferings and rejections inflicted on her son. So are we to do. This is not some masochism. Rather, it is so that the life of Jesus, as St. Paul says, will be manifest in us. In another place, Paul writes: “Now I rejoice in my sufferings for your sake, and in my flesh I am filling up what is lacking in the afflictions of Christ on behalf of his body, which is the church” (Colossians 1:24). It is through the cross that victory is attained. In Mary and in us, the cross we bear is always a tree of victory. Mary, the mother of the Church, has borne her cross for the sake of us in that Church.