Watch: The Seven Sorrows of the Blessed Virgin Mary w/ Bishop Boyea | The Burial of Jesus 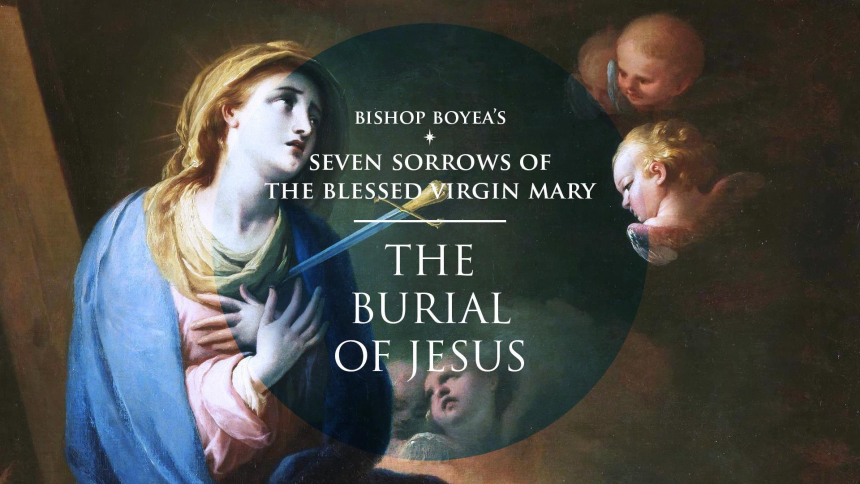 Today is the Feast of Our Lady of Sorrows. Happy feast day! Thank you for joining Bishop Earl Boyea on his pilgrimage towards today's feast as he has daily meditated upon the Seven Sorrows of the Blessed Virgin Mary. Today Bishop Boyea concludes with the seventh sorrow of Mary: The Burial of Jesus. Here is what he has to say:

In all four gospels, Joseph of Arimathea takes center stage for gathering the body of Jesus and burying it in his own tomb. St. Luke reports that “The women who had come from Galilee with him followed behind, and when they had seen the tomb and the way in which his body was laid in it, they returned and prepared spices and perfumed oils” (Luke 23:55-56). Was Mary part of this group?

St. Luke, much earlier in his gospel, makes the point that Mary was a ponderer. After the shepherds visited the manger scene, “Mary kept all these things, reflecting on them in her heart” (Luke 2:19). Again, after finding Jesus in the temple at the age of twelve, “his mother kept all these things in her heart” (Luke 2:51). For thirty-three years Mary had much to ponder. These were not the musings of curiosity. Rather, they were the thoughts of one who shared in her son’s saving ministry. The scriptures do not place her in the forefront, but she is always there, often just out of sight.

Now as the first disciple, Mary takes her role among the hiding followers of Jesus. St. Luke, in his Acts of the Apostles, notes that the eleven apostles were gathered in the Upper Room “together with some women, and Mary the mother of Jesus, and his brothers” (Acts 1:14). Mary must have continued her reflecting, but this time aloud with the others present. She must have been preparing them for the coming of the Holy Spirit, letting them know that their lives would be quite different once that overshadowing had taken place. She would have been their Gabriel.

Sisters and brothers, we have been reflecting upon Mary’s participation in the trials and tribulations, the joys and victories, of her son, Jesus Christ. She is both a model for us in following the Lord and an intercessor for us as we go through our own difficulties. Simeon had told her that the purpose of this sharing with Jesus was “so that the hearts of many would be revealed” (Luke 2:35). Both Jesus and Mary cause us to decide for or against him. Mary calls us to pray and reflect and then allow our hearts to be fully pierced by Jesus’ love that we might bear in our bodies the dying and rising of Jesus.