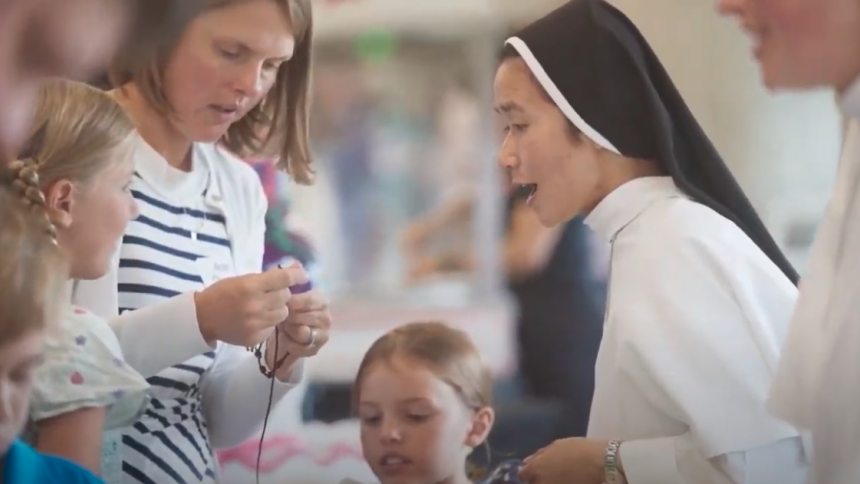 All of this is still hard to believe for Mother Assumpta Long, O.P. When she, one of the four foundresses of the Dominican Sisters of Mary, Mother of the Eucharist, looks upon the more than 150 Sisters now professed with the order, she can attribute it only to divine providence.

“The only way that I can explain it is God, because there’s no earthly reason,” she said. “God used four weak instruments, the four foundresses … and once we decided to do this it was almost like God just pushed it and made it go fast.”

The Dominican Sisters of Mary, Mother of the Eucharist, have experienced dramatic growth in the 25 years since their founding. And the women joining the Dominicans are primarily all young - the average age of one of their sisters is 33 years old.

The order was canonically established in New York City by Cardinal John O’Connor, but shortly afterward the sisters relocated to Ann Arbor, Michigan, at the invitation of philanthropist Tom Monaghan, who “wanted to build these small schools to educate children,” said Mother Assumpta.

“It almost sounded like this came from God,” she said. “We prayed about it and… we had to get permission from the Bishop of Lansing, and Bishop Mengeling warmly welcomed us. We’re so thrilled to be in this diocese.”

Both in an interview with the Diocese, and at the anniversary event last week, Mother Assumpta thanked Monaghan for his hand in bringing the sisters to Michigan. When they first arrived in the state, Monaghan provided housing for them, and the land on which their Motherhouse currently sits was also donated by Monaghan.

“There is no way I can adequately thank him for what he did over the years with his generosity and help,” Mother Assumpta said. “He gave us this push-start which started everything.”

One of the primary ways the sisters live out their charism is through Catholic education - Sisters from the order teach or work in administrative roles in 14 elementary schools, 14 high schools, and three universities throughout the United States.

In the Diocese of Lansing, the sisters can be found teaching at Lansing Catholic High School, Resurrection School, and Father Gabriel Richard High School in Ann Arbor. The Sisters also own and administer the Spiritus Sanctus Academies in Ann Arbor and Plymouth.

“When you think of the percent of people who don’t believe the Eucharist is the Body and Blood of Christ, I think education is vital and essential, and I think all of it happened when the sisters left the schools,” said Mother Assumpta.

“I want our sisters to give that to as many as possible - a strong catechetical program that they know the faith, they love the faith, and are educated not only in the subjects but also in the devotions of the Catholic Church, which are beautiful.”

In recent years, the sisters have branched out into the digital world with Openlight Media, their in-house digital operation. Openlight Media produces religious education resources, online learning courses, podcasts, and various other videos to help people grow in their faith.

Bishop Earl Boyea wrote the following in honor of the sisters’ 25th anniversary, which was celebrated last week:

“This is a wonderful occasion for so many friends and family to gather to celebrate the grace of the Holy Spirit which has been in work among you for the good of the Church these many years. We give thanks to each sister who has offered her life to that service and to all those in leadership who guide this community in such a blessed way. Mostly, I offer my deepest thanks to Almighty God for the foundresses who pushed out into the deep at the Lord’s command.”

Congratulations to the sisters upon their 25th anniversary! Ad multos annos. May we, like the four foundresses, have the courage the follow God’s call in our lives wherever it may lead. For more information, go to: https://www.sistersofmary.org/