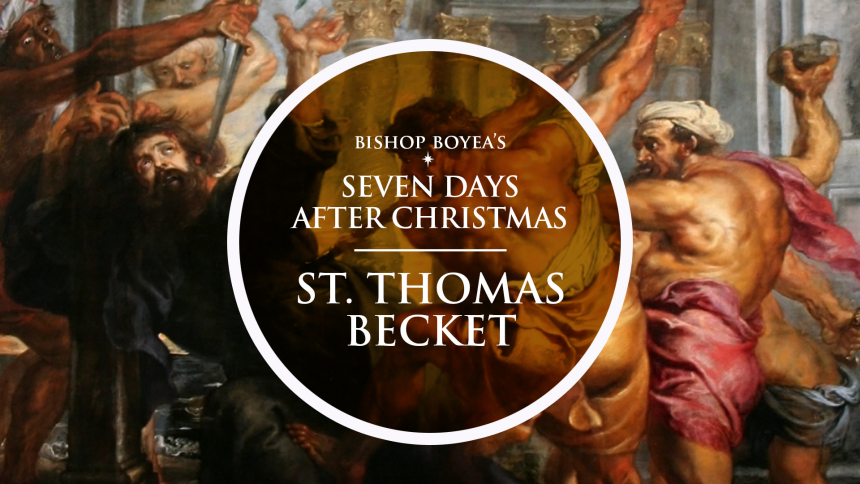 Today is the Feast of Saint Thomas Becket. Happy feast day! Saint Thomas was Archbishop of Canterbury in England from 1162 until his murder in 1170. He was killed following his conflict with Henry II, King of England, over the rights and privileges of the Church and was slain by followers of the king in Canterbury Cathedral. Soon after his death, Archbishop Becket was canonized by Pope Alexander III. Here is Bishop Earl Boyea’s reflection upon the significance of today’s feast:

“The recommended first reading for today says it all, “such is my Gospel, for which I am suffering, even to the point of chains, like a criminal.  But the word of God is not chained” (II Timothy 2:8-9).  Now Thomas Becket, as the Archbishop of Canterbury, was not chained, but he did go into exile and was eventually martyred in his own cathedral.  Supposedly, a few days earlier at Christmas in 1170, King Henry II had said to his courtiers, “Will no one rid me of this troublesome priest?”  No doubt, the king had not intended his death, but later he would do public penance for the event.”

“Becket was trying to gain greater freedom for the Church, freedom from the control of the King of England.  He strenuously fought for that freedom, seeking to unchain the Church from Henry’s grip.  His actions, of course, raised the same question many were facing: what belongs to Caesar and what belongs to God?  Of course, everything belongs to God and that is what we celebrate with the inbreaking of the Son of God into our world at Christmas.”

“The world is out there to be redeemed by Jesus’ life and death and resurrection and we are to play a part in that.  There is an appropriate role for the autonomy of the state, but that autonomy is never free of the moral obligations which God manifests in nature and in our very beings.  This is because the state is comprised of human beings who are obliged to live according the moral law carved into our hearts.”

“Sisters and brothers, Thomas was a saint but one with flaws. We, with our own flows, must help the Christ child to rule in this world balancing what is truly Caesar’s but recognizing that all is destined for God.”