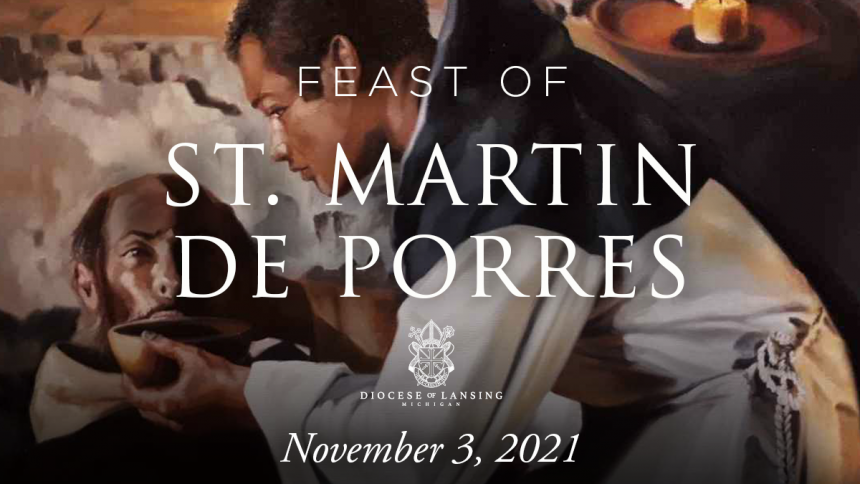 Today is the Feast of Saint Martin de Porres (1579 –1639) who is the patron saint of African Americans and racial harmony. Happy feast day!

To explain why we should know, revere and pray to Saint Martin, here’s an exclusive article by Danielle Brown, formerly of the Diocese of Lansing and now the Associate Director of the ad hoc Committee Against Racism at the United States Conference of Catholic Bishops. Danielle writes:

St. Martín de Porres’s full name was Juan Martín de Porres Velázquez. He was born in 1579 in Lima, Peru, his parents were a Spanish nobleman and a freed black woman. He is known to be the patron saint of African Americans, being the descendant of enslaved people; Barbers and Hairdressers, having been apprenticed to that trade in his younger years; Race Relations, having been confronted with much bigotry; and Social Justice, having served the poor and infirm for most of his life as a religious. He was ostracized by many in society, as well as in his own priory, for having mixed race ancestry and for being born out of wedlock. Yet, he was known for his extraordinary compassion toward others and was known to have said the following after he invited an infirm person to sleep in his bed:

"Compassion, my dear Brother, is preferable to cleanliness. Reflect that with a little soap I can easily clean my bed covers, but even with a torrent of tears I would never wash from my soul the stain that my harshness toward the unfortunate would create."

St. Martin de Porres lived his life in service to the gospel of Jesus Christ, who was able to work through him to soften the hearts of all who encountered him. Blessed with multiple extraordinary spiritual gifts during life, he was found to be an incorruptible upon exhumation after his death.

Brothers and sisters, let us learn from the example of St. Martin de Porres: we seek an end to racism and racial prejudice not because it is the fashionable thing to do, not because of politics, identity politics or otherwise, or for any other reason but for breaking down barriers that block human freedom, flourishing, access to truth, goodness and beauty, all of which have their origin in and are superabundant in Christ.