Read: "Why Saint Francis of Assisi is a Saint for Our Time" by Father James Conlon 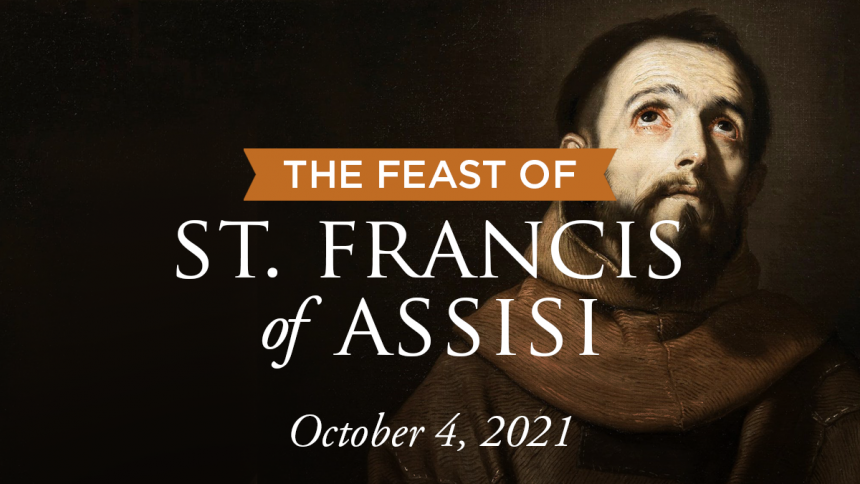 Today is the Feast of Saint Francis of Assisi. Happy feast day!

Born in the town of Assisi in northern Italy in 1181, Francis was the son of a rich merchant who abandoned all worldly things for the love of Christ. In 1209, Francis founded a new order, the Friars Minor, which numbered five thousand brothers in only ten years! He was the first person ever recorded to receive the stigmata, the five wounds of Christ. He died in 1226 and was canonized by Pope Gregory IX less than two years later.

So why should we revere and imitate the earthly life of Saint Francis and seek his heavenly intercession? Here are the prayerful insights of Father James Conlon who is the Pastor of Saint Francis of Assisi Parish in Ann Arbor. Father Conlon writes:

“As a priest I have had four assignments here in the Diocese of Lansing. By coincidence three of them, including my current one in Ann Arbor, have been under the patronage of St. Francis of Assisi. I used to say jokingly that I could never be “Franciscan” as I am not really an animal lover. But as you know there is so much more to Francis of Assisi than his love of animals or his preaching to the birds! In fact, his whole life has much to teach us all about the struggles and the joys inherent in the Christian vocation.”

“Whenever you mention St. Francis folks immediately recall how he gave up the comfort of a wealthy home and embraced a life of strict poverty. Some will also remember that he was called by Jesus himself to “rebuild my house” and how this led to the founding of the Franciscan Order and a spring time of renewal and spiritual growth for the whole Church.”

“Yet there is even more to this interesting saint than meets the eye. Above all, he was man of deep prayer, self-denial and unlimited charity: a man of firm faith: dedicated to the Church and its mission to evangelize and proclaim the Gospel. In the midst of life’s struggles he held firmly to God’s love and mercy, revealed in Jesus Christ and used that love and mercy to guide his own life and the lives of those entrusted to his spiritual care. As an ordained deacon, the Eucharist was the focus of his life and preaching. As the founder of the largest religious order in the Church, the Franciscans in all their many guises, continue this venerable tradition: from the Capuchin soup kitchen at Mt. Elliott to the Poor Clare sisters in Galway, Ireland who for almost 400 years have dedicated themselves to silent prayer at the heart of the Church.”

“Although baptized at birth, the young Francis often strayed from the gospel path in the pursuit of life’s excitement and thrills. But through it all God was quietly at work within him - helping him ultimately to let go of the passing things of this world, to overcome the opposition of family and friends: preparing him for a life of simplicity and total trust. In a way, Christ liberated Francis for all that threatened to separate him from God’s love and mercy - a liberation that all of us need if we are to take seriously our baptismal call to be Christ’s disciples.”

“As our patron, we here at St. Francis take seriously the lessons than can be learned from this great saint. As pastor, I exercise my prerogative to celebrate his feast day on the nearest Sunday so that all of our parishioners can join in the celebrations. But we go one step further - we honor Francis during the month of October. His statue stands in our sanctuary for those days, we invoke his blessing and intercession on all our activities, especially our evangelization efforts and our social outreach. Our hope is that as we learn a little more about him we might imitate his self-giving and faith and that as we imitate him we too might be drawn more deeply into love of Christ and his Church. As one of the first to receive the stigmata (the wounds of Christ on his body) Francis ultimately achieved or perhaps was granted a level of union with Jesus that we all should strive for.”

“Back in 1982 when speaking about St. Francis, Pope St. John Paul II had this to say: "It is my hope that the inspiration of Saint Francis will help us to keep ever alive a sense of 'fraternity' with all those good and beautiful things which Almighty God has created."

“May that sense of fraternity be with us all as we celebrate St. Francis and give thanks for his life and witness. Happy St. Francis Day!”

Saint Francis of Assisi, pray for us!