Read: "Why I got to know & love Saint Thérèse of Lisieux" by Father John Fain 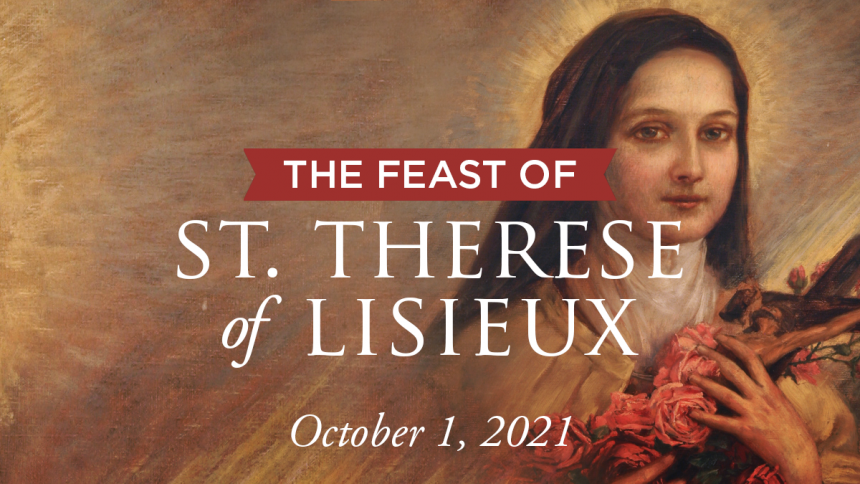 “I am embarrassed to say that I did not know much at all about St. Thérèse of Lisieux prior to becoming the pastor of the parish named after her. After arriving at St. Thérèse Parish in Lansing, I made a commitment to learning more about her life and spirituality. In turn, I came to be fascinated by her entire family, especially her parents, Louis and Zelie Martin, who were the first spouse in the Church’s history to be canonized as a couple in 2015. Through some diligence, St. Thérèse Parish was able to acquire 1st Class Relics of these two new saints. They are a marvelous witness to the sanctity of family life. I highly recommend an outstanding book on Sts. Louis and Zelie, The Extraordinary Parents of St. Thérèse of Lisieux by Helene Mongin (Our Sunday Visitor).”

“Thérèse was born on January 2, 1873. By this time, the Martin parents had eight other children, four of whom would die at very early ages. The last child to be born was Thérèse. For this reason, the family was always very protective of their youngest child. The saddest moment for the Martin family was when Zelie passed away from cancer at the age of 46. Thérèse grew ever closer to her sisters, the eldest of whom joined the Carmelite Convent at Lisieux. In time, she would be followed by two of her sisters. Thérèse longed to join her sisters in the Carmelite way of life. The Carmelite rule required that young women be at least 15 years old to enter this religious order. Fourteen years old, she petitioned her bishop to grant her an exemption. She even put her hair up in a bun in order to make herself look older. The bishop gently turned down her request. Determined, Thérèse and her father Louis decided to take their request to the highest authority – Pope Leo XIII himself. In an audience with the Pope, she flung herself at him and cried out, “Most Holy Father, I have a great favor to ask you… permit me to enter Carmel at the age of 15.” This Pope, known for his kindly manner, responded, “Well, my child, do what the superiors tell you.” Thérèse continued, “Oh Holy Father, if you say yes, everybody will agree.” The Pope answered slowly, enunciating every word, “Go, go – you will enter if God wills it.” Shortly thereafter, Thérèse was indeed able to enter the Carmelite Convent at the age of 15.”

“The last nine years of Thérèse’s life were spent in the Carmelite Convent at Lisieux. Outwardly, she was recognized as a good nun, but as nothing exceptional. Her sister, Pauline, who was now the prioress of the convent, recognized that Thérèse had a unique interior life. She ordered her younger sister to write down her autobiography, which would become known as The Story of a Soul.”

“What is it that has attracted so many people to St. Thérèse of Lisieux over the past 120 years? I believe it is her spirituality rooted in the simple but difficult virtue of love. It is a spirituality to which everyone can relate. Unlike many saints, God did not demand grand things of her. Like Jesus Christ Himself, she practiced a spirituality of abandonment. This, along with a great sense of charity, enabled her to do ‘little things with great love’.”

“This quiet love bore itself out in the life of her convent. We might imagine that the life of the cloister was a heavenly one, but living with imperfect people had its difficulties. Together, the sisters would clean handkerchiefs in a large pool of water. One sister, probably deliberately, regularly splashed hot, dirty water into Thérèse’s face. Thérèse bit her tongue and offered up this annoyance. Another sister made clacking noises in the chapel. Most likely she was toying with her rosary. This noise distracted Thérèse’s prayer immensely. Thérèse made the clacking a concert of prayer to Jesus.”

“In June, 1895, she made a prayer, desiring to join further in Christ’s abandonment. She was living in complete union with Christ and was giving her life for souls. Her superiors finally recognized the strength of her spirituality and encouraged her to dedicate her prayers and sacrifices for missionaries. This is why is she is known as one of the patron saints of the missions, along with the great St. Francis Xavier. We do not necessarily need to go to the missions ourselves; our prayers aid them greatly.”

“In 1896, sometime between the hours of Holy Thursday and Good Friday, Thérèse experienced intense hemorrhaging caused by tuberculosis from which she had suffered for two years. Like Mother Teresa of Calcutta, she began to experience a seriously dark period of doubt in her life. It tried her faith and made her question her life, especially the spirituality of the Little Way. In the first section of her The Story of a Soul, she dialogues with Christ. In the second section, she dialogues with death. Ultimately, she returned to her abandonment to Christ through her ‘little way’.”

“In July 1897, Thérèse was brought to the convent infirmary where she continued to experience intense pain from hemorrhaging due to her tuberculosis. However, she was convinced that death would not defeat her. In perhaps what is her most famous quote, she said, ‘I will send down a shower of roses from the heavens; I will spend my heaven doing good upon earth’.”

“Lying outside in a bed in the convent cloister, Thérèse hung on to life for a couple more weeks. On September 30, 1896, it was clear that her death was near. The sisters gathered around her bed. Thérèse held a crucifix in her hand. Her last words were, “Oh, I love Him,” and a few moments later, ‘My God, I love you’.”

“Within a short period of time, pilgrims began to make their way to the Carmelite Convent to pray at the grave of St. Thérèse. In 1923, Pope Pius XI beatified her, and on May 17, 1925, he canonized her. On October 19, 1997, Pope St. John Paul II named her the 33rd Doctor of the Church and at the age of 24, the youngest Doctor of the Church. She joins only three women to be such named, the others being St. Teresa of Avila, St. Catherine of Siena and St. Hildegard of Bingen. This young nun and woman of faith left a tremendous mark on the world of Catholic spirituality. It is truly a blessing to serve at a parish with her as its patron.”

Saint Thérèse of Lisieux, pray for us!