Read: "There is so much more beauty and meaning in a Catholic life" 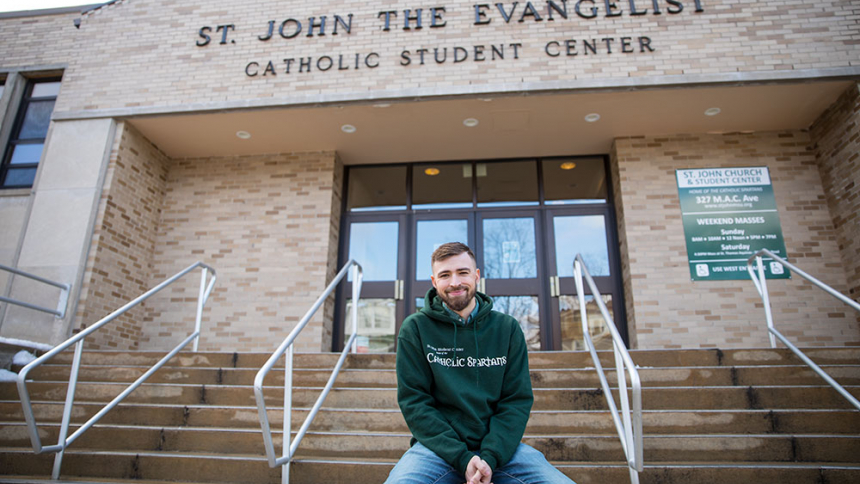 This month’s FAITH Magazine, the official publication of the Diocese of Lansing, features some remarkable first-hand testimonies of young Catholics including Michigan State University student, Anthony Amoroso, who explains how life on campus in East Lansing has helped him fall in love with Jesus Christ, his Holy Church …and a beautiful young Catholic woman named Monica.

“My first month at Michigan State University was a rough start. Making the transition to university life brought up old anxieties and fears. One particularly lonely September night, I cried out silently to God, asking how I could find peace,” writes Anthony in FAITH Magazine.

“At around one in the morning, I became so desperate I did something I almost never did. I began to pray. I asked God what he wanted of me and what I could do to make my life better. At that very moment, I heard a voice clear as day in my head. It said, ‘Worship. Worship. Worship’.” What happened next? Read Anthony’s love story in full here:

“I grew up in a belief system that was mostly irreligious. My parents consider themselves to be spiritual rather than religious people, and that is how I viewed myself, too.

“So, when a family member gave me a rosary as my high school graduation gift, I was very surprised. It turns out he was, too. He told me that something called him to give me that gift – even though neither of us was Catholic.

“Growing up, I was skeptical about religion but curious about different faiths. There were times I had felt called to explore, so I took a world religions class at school. After graduation, I set the rosary aside and headed off to college.

“My first month at Michigan State University was a rough start. Making the transition to university life brought up old anxieties and fears. One particularly lonely September night, I cried out silently to God, asking how I could find peace.

“At around one in the morning, I became so desperate I did something I almost never did. I began to pray. I asked God what he wanted of me and what I could do to make my life better. At that very moment, I heard a voice clear as day in my head. It said, ‘Worship. Worship. Worship.’

“I immediately texted a Catholic friend from home: ‘Next time you go to church, take me with you.’ He graciously invited me to go to a night Mass at St. John Student Center the next week.

“At 8:45 on Tuesday and Thursday nights, St. John Student Center hosts night Masses for college students. The late time fits into our schedules better and the homilies are often tailored to college student needs.

“I didn’t believe in the Eucharist or understand the rituals, but I knew there was something beautiful about a church full of students on a weeknight. These people were worshipping God when they could have been out doing anything they wanted. That beauty drew me back every Thursday through the fall and winter.

“Soon I started going to Mass on Sundays, too. The whole time, I kept telling myself, ‘I’m not Catholic, not one of those people.’ At the same time, my friend was encouraging me to go to Thursday night small group Bible study just before Mass. For a while, I told him no, but one night in October, I finally agreed.

“The session was led by a beautiful young woman named Monica. She was different from anyone I’d ever met. She had a different outlook on life that had more meaning. By the end of that gathering, I was very interested in going on a date with her.

“She had no interest in me at all.

“Then, in the third session, we did an icebreaker where we had to answer the question, ‘If you could have dinner with anyone, who would it be?’ She said, ‘This is going to sound corny, but I would choose my future husband.’ That was when my brain was screaming, ‘Wow, she is who I want to be with!’

“Over the fall and winter, I got to know Monica and God better. She showed me how to pray the Rosary, and I got to make use of my graduation gift. By February, and the spring undergraduate retreat, my walls against Catholicism were starting to wear down. During the retreat, Father Ryan asked if he could talk to me to discuss where I was with my faith. He asked me to give him 10 days to convince me to choose the Catholic Church. When I told him that was not where I was at, he told me he knew Christ would win.

“It took more than 10 days. Still, his question got the ball rolling for me to really look at why I didn’t want to be Catholic. When I told my mom I was thinking about joining the Church, she said, ‘It seems like you’ve found a home for yourself. I’m happy for you.’

“On March 21, Monica agreed to go out with me. And the following September when I decided to join RCIA (Rite of Christian Initiation of Adults), she became my sponsor. Even as we attended Mass twice a week and RCIA class on Sundays, I had made a deal in my head. ‘I’m pretty sure I’m going to become Catholic,’ I told myself. ‘But if any major disagreements come up, I’m out.’ Nothing ever changed my mind.

“In fact, one of my Catholic friends invited me to join him and two other guys on a Catholic spiritual exercise called Exodus 90. The program is designed to lead men to freedom from addiction and sin through prayer, asceticism and fraternity. I accepted the challenge and for the 90 days before Easter I read the Book of Exodus, practiced acts of self-denial and met weekly with my Exodus 90 brothers.

“I ended Exodus 90 by going to Easter Vigil Mass where I was baptized, confirmed and received first Communion. The timing was perfect. I didn’t want to bring my previous behavior into my new relationship as a child of God, and Exodus 90 helped cleanse me of my old patterns. It was awesome.

“As summer hit and I was working three jobs, my opportunity for quiet and stillness to find God dwindled. I hit a stress wall that really set me back. I’ll tell you, the sacrament of reconciliation is an amazing gift!

“Now, as I look ahead to my senior year, I am ready to graduate and begin my adult life. I am so thankful I have my Catholic faith to prepare me for whatever lies ahead – career, marriage, children.

“God calls us to a life revealed through the Bible, our catechism and the example of the saints. As a person who has lived an agnostic lifestyle, I can honestly say that there is so much more beauty and meaning in a Catholic life. It may be harder in today’s society to fully live the life God calls us to, but as a new member who was skeptical at first, I am so grateful I answered God’s call.”

For more from FAITH Magazine go to https://faithmag.com/