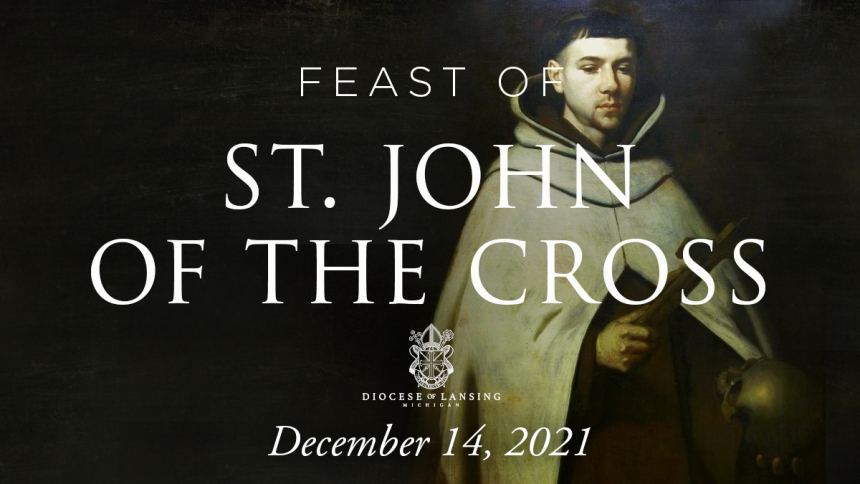 Today is the Feast of Saint John of the Cross, the 16th century Spanish priest and mystic who worked closely with Saint Teresa of Avila to reform the Carmelite Order and, thus, renew the Catholic Church at a time when she was threatened by impiety from within and heresy from without. Saint John’s saintly labors, however, brought much suffering which he increasingly united to the Passion of Jesus Christ as Bianca Murray, Lay Carmelite and Administrative Assistant with the Diocese of Lansing, now explains. Bianca writes:

Saint John of the Cross is most remembered for the literary works he composed, which to this day remain among the greatest works of Spanish literature.

One of Saint John’s most notable works, Dark Night of the Soul, an eight-stanza poem which is reproduced below, is believed to have been composed while Saint John was imprisoned by Carmelite friars who were resisting the reform.

This trial of imprisonment, as well as the other difficulties he endured, proved to be fertile conditions for the Saint to develop a treatise on a soul’s journey to mystical union with God.

As Saint John of the Cross describes in Dark Night of the Soul and more deeply in the Ascent of Mount Carmel, the path to union with God has three stages – the Purgative, the Illuminative and the Unitive.

In the Purgative stage, a soul becomes aware of its sinfulness, has contrition for past offenses and strives to make reparation for offenses against God.  In this stage the primary motivation of the soul is love for God.

In the Illuminative stage, the purification of the soul continues, but what differs in this stage is the soul is more enlightened in the ways of God and actively seeks to grow in virtue.

In the third stage, the Unitive stage, the soul is perpetually aware of the presence of God and routinely strives for conformity to His Will.

The key elements in both of Saint John of the Cross’ works Dark Night of the Soul and the Ascent of Mount Carmel is purification by means of purgation. Purgation of sin, self and spirit so that one may attain to perfect union with God – “where only the honor and glory of God remains.”

The greatest lesson one can learn from this remarkable Saint is that union with God is possible on this earth.  The path to such union is narrow and marked by the way of nothingness, but none-the-less reachable.

May we continue to traverse the path of nothingness – always striving to decrease so that our Lord may increase!

Dark Night of the Soul

1. On a dark night, Kindled in love with yearnings—oh, happy chance!—
I went forth without being observed, My house being now at rest.

3. In the happy night, In secret, when none saw me,
Nor I beheld aught, Without light or guide, save that which burned in my heart.

4. This light guided me More surely than the light of noonday
To the place where he (well I knew who!) was awaiting me— A place where none appeared.

6. Upon my flowery breast, Kept wholly for himself alone,
There he stayed sleeping, and I caressed him, And the fanning of the cedars made a breeze.

7. The breeze blew from the turret As I parted his locks;
With his gentle hand he wounded my neck And caused all my senses to be suspended.

8. I remained, lost in oblivion; My face I reclined on the Beloved.
All ceased and I abandoned myself, Leaving my cares forgotten among the lilies.