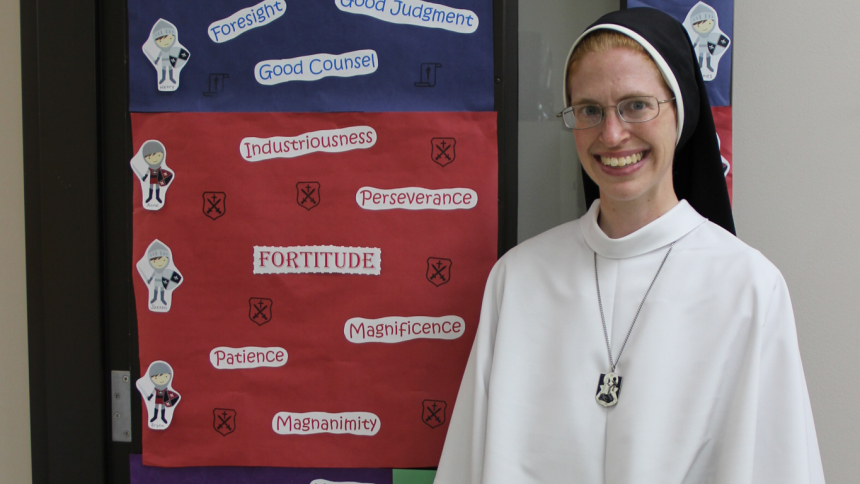 Of your charity, please pray for Sister Maria Kolbe who is a Dominican Sister of Mary, Mother of the Eucharist, whose motherhouse is in Ann Arbor in the Diocese of Lansing. 37-year-old Sister Maria is a native of Indiana and is currently on mission in Columbus, Ohio, with some of her fellow Dominican Sister. Here, in her own words, Sister Maria recounts the story of her sisterhood. She writes:

My name is Sister Maria Kolbe and I’ve been a Dominican Sister of Mary, Mother of the Eucharist for almost 16 years now. I’m from Earl Park, Indiana, and I grew up in a devoutly Catholic family with three older brothers and a younger sister. Christ was the center of my family’s life and devotion to the Blessed Mother was a part of that. Not only did our family attend Mass every Sunday, but we prayed the family rosary almost nightly, received the sacraments frequently and shared our faith with others. I attended a Catholic elementary school and a public high school. When I was about 16 years old, my parents told me that our family was going to consecrate ourselves to Jesus through Mary through the intercession of Saint Maximilian Kolbe. I’d never heard of this saint nor did I know what consecration to Mary meant at the time, but trusting my loving parents, I figured it must’ve been “a good thing”. Little did I know what a powerful impact this action would have on me personally and for the rest of my life!

Shortly after this I became a member of the Militia Immaculata movement (founded by St. Maximilian Kolbe in 1917) at our parish. Every Sunday evening our parish would gather for a holy hour with exposition of the Blessed Sacrament, which also included praying the rosary and vespers. Afterwards my siblings and I (with a number of other youth from our parish) would gather with our good pastor, Father Timothy Alkire, who spoke to us about Saint Maximilian Kolbe and the MI movement. He not only taught us about the movement and its goal (i.e. to conquer the entire world for Jesus through Mary), but he showed us how to live it by living out our Marian consecration to the fullest. In doing so, I quickly realized how this not only impacted my personal relationship with Jesus and Mary, but it also impacted the lives of those around me, drawing them more closely to the Sacred Heart of Jesus. I was amazed and humbled in seeing how God could work such wonders through me. This brought unspeakable joy to my heart and I wanted to share this joy with others! It was then I began discerning a religious vocation, wondering how God could use me entirely to bring as many souls to Him through our most Blessed Mother as much as possible. I shared this longing desire with my pastor, who graciously took me “under his wing” and helped me discern my vocation to religious life.

After a couple of years of prayer and discernment and visiting different religious communities, I decided that I would attend Franciscan University and study Theology until I knew “for certain” which Religious community our Lord was calling me to enter. While a student there, the name of the Religious community “Dominican Sisters of Mary, Mother of the Eucharist” kept mysteriously coming to me, whether it was in conversation with friends, in an email from home, on a website I stumbled across or in a pamphlet I found in the school’s chapel. It was as if God was really trying to get my attention, and yet, I wasn’t fully convinced because of my lack of trust and understanding of God’s mysterious designs. Finally, it was the words of a good friend and spiritual director, Father Daniel Pattee, that “broke the ice” and I began to understand and placed my confidence in God’s work. I eventually worked up the courage to contact the community’s vocation director, Sister Joseph Andrew, and shared my desire to enter religious life as well as my interest in their community. Sister, who was very supportive, invited me to attend their community’s “Pre-Postulant Week”, which allowed me to experience a portion of their Religious life for a time. After much prayer and discernment that week, and having spoken to Sister, I had confidence in Jesus and Mary that this was the place I’d call “home.” I joined the Sisters that summer and have never been happier! Praise God in His most Holy Mother!