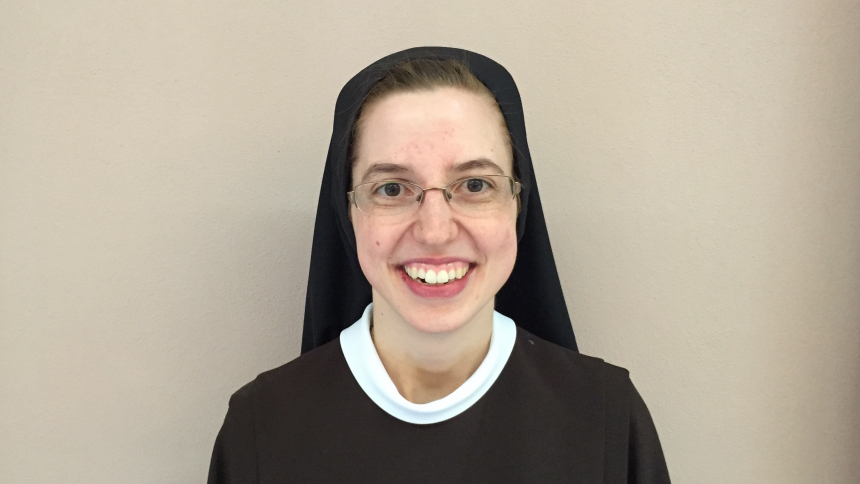 “Thus says the Lord, He Who created you, O Jacob and He Who formed you, O Israel: Fear not, for I have redeemed you; I have called you by name: you are Mine,” Isaiah 43:1

“What is any retelling of a vocation story but a reflection on a love story? In the case of my religious vocation, this foundational premise is no different except that my Beloved is the Lord Himself and I am His (Song of Songs 6:2). It is the love relationship we are all called to, for the Lord became man to become the Bridegroom of each of our souls that we may enjoy union with His Father through Him in the power of the Holy Spirit for all eternity. We call this our eschatological end but, for the religious, the eschatological is brought to, and lived in, the present moment.”

“How did my love story begin? I certainly wasn’t aware of it at my Baptism, when the Lord first claimed me as His own as a six-week old baby. Growing up, I thought of ‘becoming a nun’ when I read children’s lives of the saints while in high school and college I explored the possibilities when I visited the motherhouse of the Sisters of Saint Francis of Perpetual Adoration. But it wasn’t until I found myself restless and hungry for more – more of God – when, as a second-year graduate student in the PhD program at Michigan State University, I realized that I needed to pursue, again, the previously ‘shelved’ idea of becoming a religious sister. And it was in the context of seeking my true love – although at this point I thought it was a good Catholic man. I was praying to Saint Jude, Saint Gabriel, and Saint Raphael to find the man who would be a good Catholic husband when the idea – unasked for – came to mind: ‘Jesus is the perfect Husband’. Coupled with this ‘mini-revelation’ (that I knew in theory but didn’t know it applied to me as my calling) came the ‘double-edged, alive and active’ (cf. Heb 4:12) words from the Word Himself, quoted in the Gospel, which I will always reverently treasure as life-changing: ‘Jesus looked at him (the rich young man), loved him, and said, ‘If you wish to be perfect, go, sell what you have and give to the poor, and you will have treasure in Heaven; then come, follow Me’.’ (Mt 19:21-22; Mk 10:21). I did not want to go away sad (like, heartbreakingly, the rich young man did). I talked to Dawn Hausmann, the Vocations Director for Consecrated Women in the Diocese of Lansing, who reassured me I was not crazy. No, this was the Lord’s invitation, the Lord’s call, and I wanted to be different from the rich young man! Ahhh, the Gospel breaking forth into my life and shattering my own plans that only left me restless, insipid, and unsatisfied! The Lord was calling me and I jumped, took a leap of faith, and initiated contact with the vocation directors of two religious communities, one of which was the Sisters of Saint Francis of Perpetual Adoration. I left the graduate program at Michigan State with a Master’s Degree, instead of a PhD, and entered the Sisters of Saint Francis of Perpetual Adoration in 2013.”

“As in any love story, following the Beloved is not always easy. Jesus Himself did not spare Himself the way to Calvary, and He told us that everyone who follows Him must ‘take up his cross daily’ (Lk 9:23).” But it is His Love that first drew me to follow Him in this way of life and this same Love – rather a deeper experience of this same, unchanging Love – that leads me on as I surrender to Him more and more in my own weakness and poverty. The love story begins again every day, as the Lord ‘renews His mercies every morning,’ (Lm 3:23) until He brings me to that eschatological and eternal union with Him, the goal of every vocation.”

Please do keep Sister Mary Augustine in your prayers.

Saint Francis, pray for her.

Saint Clare, pray for her.