Read: My Dad, My Hero by Father Todd Koenigsknecht 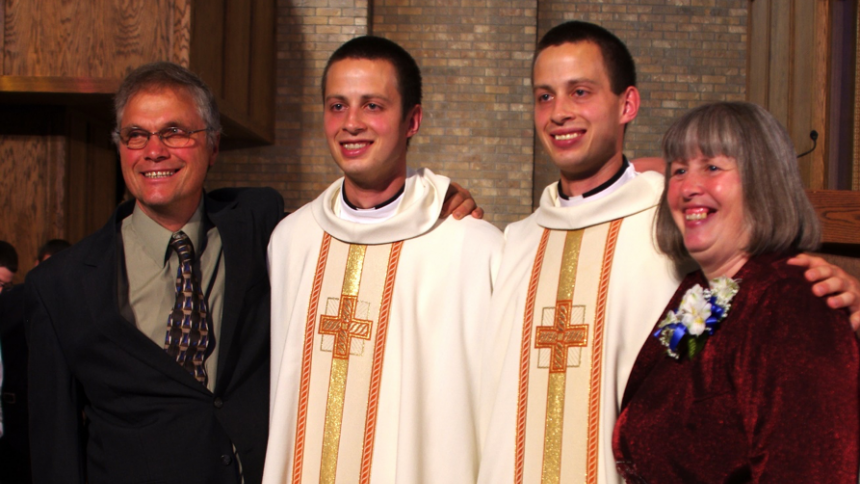 This Sunday, June 19, is Father's Day. Each day this week, we will be publishing a first person story from men who wish to pay tribute their dads for being great Christian fathers in the mould of Saint Joseph.

Today we hear from Father Todd Koenigsknecht, Pastor of Sacred Heart & St. Mary on the Lake Manitou Beach, who is pictured above next to his father, Brian Koenigsknecht, upon ordination day in 2014.

Both Father Todd and his brother, Father Gary Koenigsknecht, grew up on the family's organic dairy farm near Fowler. Mom and dad, Agnes and Brian, have ten children in total. Deo gratias. The family are parishioners at Most Holy Trinity in Fowler. Father Todd writes:

What are some of the things I treasure most from my Father? It has always struck me in Scripture that St. Joseph didn’t say a signal word. He simply heard God’s call and acted, even in times of great trial. But his silence in those moments speaks volumes in itself. That is one of the great traits I have seen in my dad and that I am so grateful for.

We once had a disaster on our family dairy farm. Due to some faulty plastic silage bags, we had 500 tons of freshly harvested silage laying exposed to the sun and air where it would quickly rot if we couldn’t take care of it. I happened to be in the right place at the right time to witness my dad seeing it for the first time and his immediate reaction.

Like all emergencies there was an answer and in due course we did take care of it. We ended up moving all five hundred tons of feed into new silage bags. I am not saying it wasn’t a lot of work- it was! It took two days where everything else was scrapped so we could devote ourselves to fixing the problem. While the example of a good work ethic is something I also treasure from my dad, in this memory it isn’t the thing I treasure the most.

No, the thing I treasure most from that moment was my dad’s reaction. He did not scream and swear. He did not get on the phone and yell at some other poor person. He didn’t take it out on us, the people around him, like we can tend to do when sufferings and trials come. He didn’t get mad at God and ask why he was being so punished. What a blessing to see that even I the face of disaster we can have another kind of reaction. Instead of all those possible reactions there was relative calm. We figured out what needed to happen, found the people to help us get the stuff to make it happen, and then we fixed it.

Life isn’t always easy, it isn’t always fair, and sometimes the solution will mean a lot of unasked for and undeserved work. But those facts, as dire as they are sometimes, don’t control the reaction that we have to whatever we face. For my dad I think the answer was that he knew even this disaster was taking place in God’s providence. He had been faithful to our family, He would continue to be faithful, and so we could trust that this would be also be handled. His reaction mirrored that truth.

The older I get the more I appreciate the additional fact that behind that reaction was a whole series of prior choices. In much smaller situations he had chosen to be patient when things where frustrating, he had chosen to not let anger rule him things went wrong, he had chosen to persevere when it would have been easy to throw in the towel. Raising ten kids with my mom I know we provided ample opportunity for them to make those choices on a daily basis! But God’s grace filled all those moments. They prepared him for this much bigger situation.

I am so grateful for his example that has helped shape my priesthood. Now, I am not saying I have always handled dire situations with that same calm! Nor even all of the smaller daily choices if I am being honest. But it is something I strive for.

Thank you, Dad! St. Joseph, pray for us.