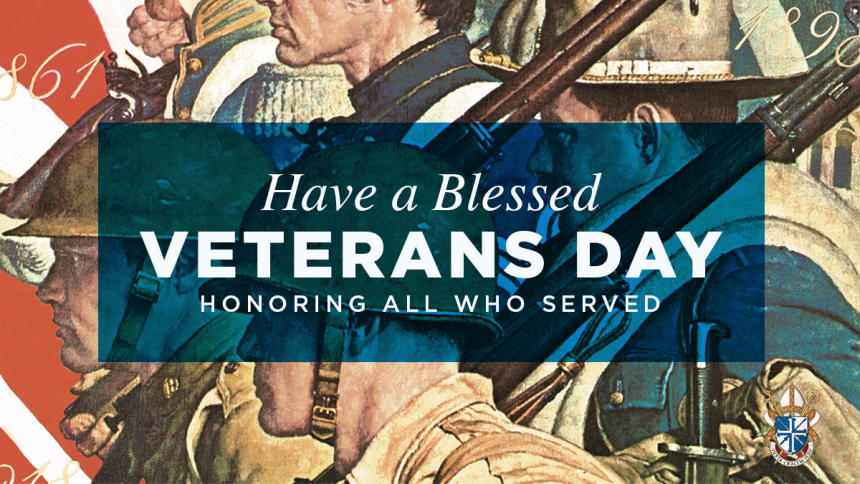 Today is Veterans Day. Today is also the Feast of Saint Martin of Tours, the 4th century soldier turned bishop of Tours in France.

Prayerfully reflecting upon today’s twin commemorations for us is Deacon Tom Fogle of Saint Mary in Charlotte. Deacon Tom served in the U.S. Air Force for 24 years. He was ordained to the diaconate in 2005. In this wonderful article, he suggests resurrecting a notable Veterans Day custom of his youth: A prayerful two-minute silence at 11am.

“May I suggest that at the 11th hour, on the 11th day, on the 11th month we all again pause from our daily routine for two minutes of silent prayer asking St. Martin of Tours to intercede for us; asking God to protect and keep safe all those past, current, and future members of the military as they serve Him by serving others,” writes Deacon Tom, November 11, 2021.

Here is Deacon Tom’s article in full. We hope you enjoy it. He writes:

“As a career Air Force Officer (24 years of active duty), two US holidays have a special meaning to me: Memorial Day on 31 May and Veterans Day on 11 November. Memorial Day where we honor those soldiers, sailors, and airmen who gave their lives in the ultimate sacrifice of service to their country. Veterans Day where we honor all those who have served in the Armed Forces.”

“Prior to 1954, Veterans Day in the United States was known as Armistice Day (Remembrance Day in Canada, France, Great Britain, and other Commonwealth nations), the day on which the hostilities between the Allies and Germany ceased on the western front marking an end to WWI.”

“More precisely it was at the 11th hour, of the 11th day, of the 11th month in 1919, at Rethondes, France, that the Allied powers signed a ceasefire agreement with Germany. In my youth, it was a tradition to pause all activities at home, school, and in the workplace for two minutes of silence to remember those who fought and died during the war.”

“Even today, after 35 years of military retirement, when I have the occasion to wear my full military uniform, I wear it proudly with honor paying tribute to all who served before me. I can honestly say, I feel just as privileged and blessed when I wear my clerics and vestments in service to the people of God as I do when wearing my military uniform.”

“One might think these two careers are polar opposites, but they are not! Both have allowed me to fulfill a Fogle Family mantra that, “We are put on this earth to serve others.” It is a mantra rooted in scripture from Matthew 20:28, “I have come not to be served, but to serve.”

“Like my younger brother, I too served during Vietnam where I was a loadmaster flight crew member on a heavy cargo airplane – carrying supplies, equipment, and personnel into Southeast Asia and most often the remains of fallen soldiers home to the U.S. in their flag covered caskets.”

“I felt the same emotions then as I do now when I assist or preside at a funeral for a veteran in their flag covered casket. The big difference between then and now is my age; not my sense of honor and privilege that God has allowed me to be of service to those who have given their all-in service of their country. I have always believed that I entered the military for a reason (totally unknown to me at the time) but became apparent when I discovered that just like civilian life, military life is focused on service to God through others.”

“St. Martin of Tours discovered a similar path. His father was a senior officer (tribune)in the Roman army. A few years after Martin’s birth, his father was given veteran status and was allocated land on which to retire in northern Italy, where Martin grew up. As the son of a veteran officer, at age 15 Martin was required to join a cavalry unit. At the age of 18, he was stationed in Gaul (now Amiens, France).”

“While Martin was in France, he experienced a vision, which became the most-repeated story about his life. One day as he was approaching the gates of the city of Amiens, he met a scantily clad beggar. Using his military sword, he impulsively cut his military cloak in half to share with the man. As the story goes, that night Martin dreamed of Jesus wearing the half-cloak he had given away. He heard Jesus say to the angels: ‘Martin, who is still but a catechumen, clothed me with this robe’.”

“In another version of the story, when Martin woke, he found his cloak restored to wholeness. The dream confirmed Martin in his piety; he was soon after baptized. He eventually was stationed in Milan. There is speculation that it was likely a part of the elite cavalry unit who were bodyguards of the Emperor, which accompanied him on his travels around the Empire.”

“Martin kept his portion of the cloak which eventually became the famous relic preserved in the oratory of the Merovingian kings of the Franks at the Marmoutier Abbey near Tours. The priest who cared for the cloak in its reliquary was called a cappellanu, and ultimately all priests who served the military were called cappellani. The French translation is chapelains, from which the English word chaplain is derived.”

“A similar linguistic development took place for the term referring to the small temporary churches built for the relic. People called them a capella, the word for a little cloak. Eventually, such small churches lost their association with the cloak, and all small churches began to be referred to as chapels.”

“Upon completion of his military obligation, Martin became a Monk and hermit. By AD 371, he was acclaimed bishop of Tours, where he impressed the city with his demeanor. He had reluctantly allowed himself to be consecrated bishop (after hiding out in a barn full of geese!) Because of his military service and the use of his military sword to cut his cloak in two so he could give it to a beggar, he is heralded as the patron saint of the military with his feast day being November 11th – Veterans Day.”

“May I suggest that at the 11th hour, on the 11th day, on the 11th month we all again pause from our daily routine for two minutes of silent prayer asking St. Martin of Tours to intercede for us; asking God to protect and keep safe all those past, current, and future members of the military as they serve Him by serving others.”

“I feel fortunate and blessed to share in St. Martin of Tours call to serve others by way of the military and to continue serving others in my retirement as an ordained Catholic Deacon.”

* Photograph, below, Deacon Tom Fogle just prior to retirement from the U.S. Air Force in 1985. 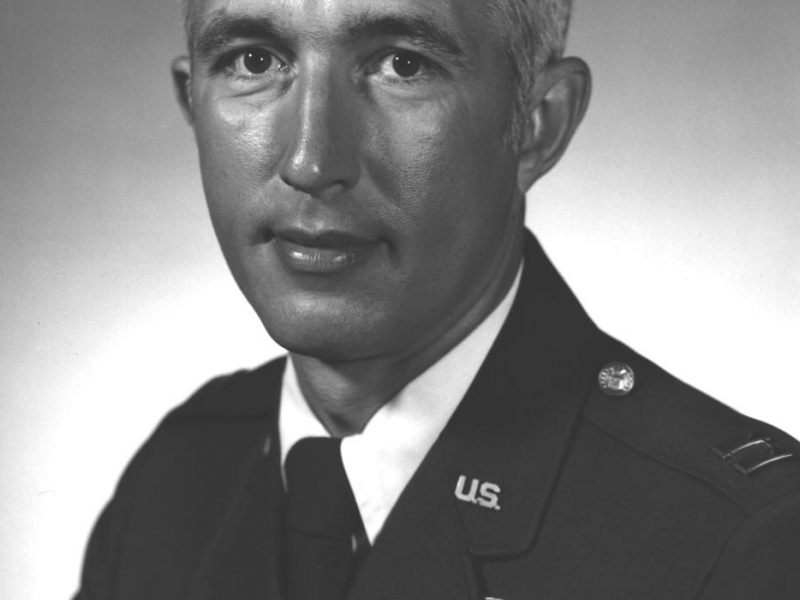