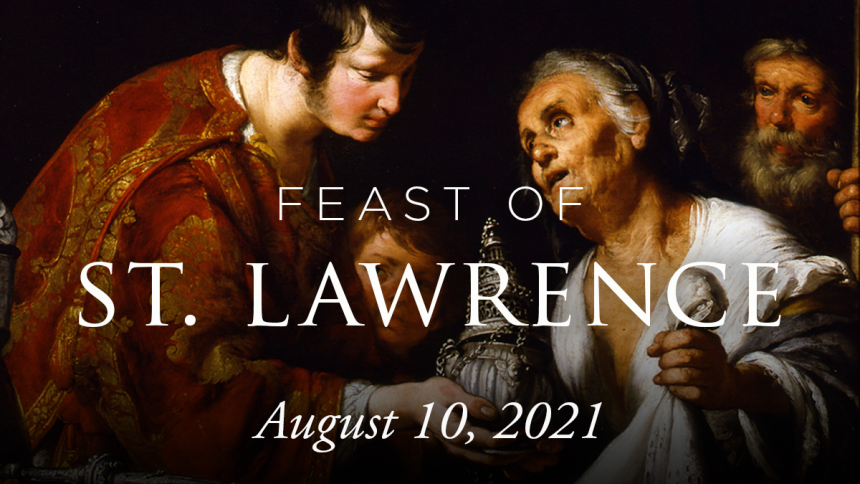 Today is the Feast of Saint Lawrence, Deacon and Martyr. Happy feast day! Lawrence was chief among the seven deacons who served the Roman Church during the mid-third century. His martyrdom came at the behest of the Emperor with Saint Lawrence being laid upon a gridiron and slowly roasted to death. So, what can we learn from the life and death of this saintly deacon? Here are the prayerful insights of Deacon Aaron Petersen of Saint Anthony in Hillsdale. He writes:

“If you appreciate vintage TV commercials, you might remember the Klondike ice cream bar commercials. If so, you are probably at this very moment singing in your head their tagline jingle, “What would you do for a Klondike Bar?” I wonder how many kids have had to jump like kangaroos or perform outrageous skits (like the commercial people did) so their parents would give them a Klondike bar? Personally, I plead the fifth.”

“Enough about Klondike bars. The better question is, ‘What would you do to help Jesus build His Kingdom?’”

“Saint Lawrence was a deacon in 257 AD and one of the first deacons for the church in Rome. Only a year after his ordination, Emperor Valerian ordered the execution of all bishops, priests, and deacons, so Saint Lawrence worked quickly to distribute all the resources he could to the poor in Rome. Displeased with this, the Prefect of Rome commanded Lawrence to bring all the treasures of the church to him. Lawrence obliged, but instead of gathering all the silver and gold, he gathered all the poor of the church and brought them to him and said, ‘This is the church’s treasure’. St. Lawrence was executed for his faith and his actions.”

“Deacons in the early church, like deacons today, were to live devout lives, heralding the Gospel and serving those in need. When we see a deacon at mass, we notice his stole that crosses his body, like a towel thrown over the shoulder. This is a reminder that deacons are to configure their lives to Christ the Servant, who washed the feet of His apostles at the last supper.”

“A good deacon, like Saint Lawrence, is a good example for all the faithful. How often do we stick out our neck for those who are poor, suffering, or otherwise in need? Do we have a habit of ignoring others in need with handy excuses why we can’t get involved? Do we shy away because it is inconvenient, unpopular, thankless, or painful?”

“As faithful Christians we are called to give without counting the cost, and to give of our substance and not just of our surplus. St. Lawrence and our Lord are asking all of us, ‘What would you do for the least of mine?’”

Saint Lawrence, pray for us!