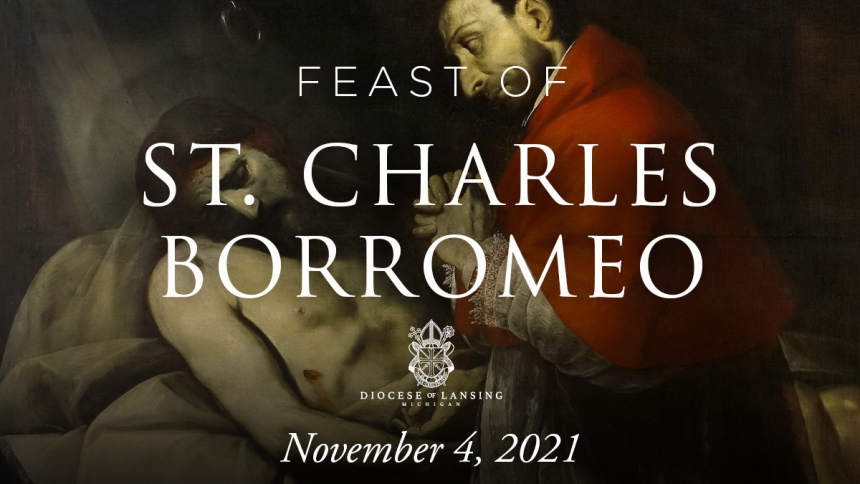 Please pray for our 31 Diocese of Lansing seminarians upon the Feast of Saint Charles Borromeo, patron of seminarians. Saint Charles was a great 16th century Italian cleric who established the modern seminary system in order to raise up pious and learned priests who are equipped to dispel the heresies of the age with the divine warmth and light of Jesus Christ and His Holy Church.

“He [Charles Borromeo] was aware that a serious and credible reform had to begin precisely with Pastors if it was to have beneficial and lasting effects on the whole People of God,” wrote Pope Benedict XVI upon the 400th anniversary of the canonization of Saint Charles Borromeo in 2010.

Saint Charles Borromeo (1538-1584) was a member of a noble family and a nephew of Pope Pius IV. He was made a cardinal at the age of 23 and assisted Pope Pius in administering the affairs of the Holy See and in governing the Universal Church. Soon thereafter he was made Archbishop of Milan.

His endeavors on behalf of the Council of Trent (1545-1564), convened in order to respond to the heresy of the Protestant Reformation, were especially meritorious and fruitful. He helped to direct and guide it and bring it to a successful conclusion.

He then proceeded to implement its decrees in the Archdiocese of Milan and thoroughly reformed Catholic life in his see. His starting point for the reform of the Church was always personal holiness.

“Charles Borromeo neither limited himself to deploring or condemning nor merely to hoping that others would change, but rather set about reforming his own life which, after he had abandoned wealth and ease, he filled with prayer, penance and loving dedication to his people," wrote Pope Benedict.

So, have a very happy feast day! Saint Charles Borromeo, pray for us!