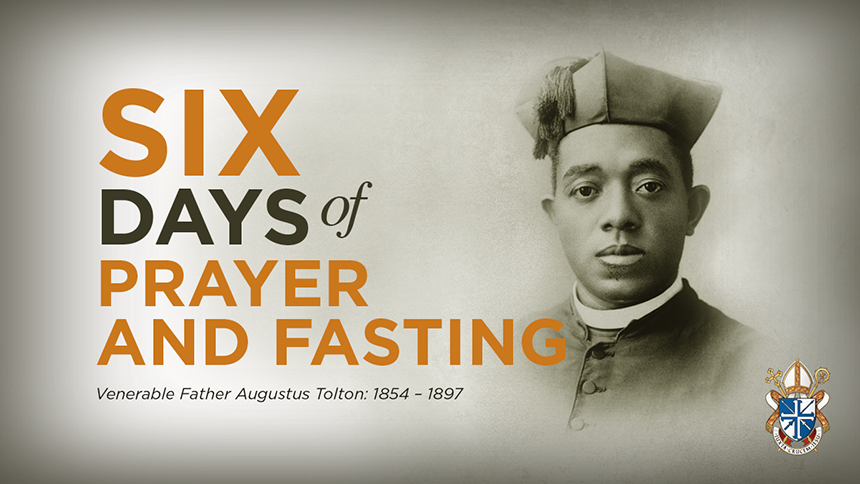 Bishop Earl Boyea of Lansing has declared the next six Fridays as days of prayer and fasting in order to seek peace, justice and reconciliation for all the peoples of the United States. The six days coincide with the lead-up to the anniversary of the death of Venerable Augustus Tolton (1854 – 97), a former slave who became the first black priest in the United States.

“Any path forward for our dear yet divided nation has to begin with prayer –- in earnestly bringing our fears, our hopes, our anger, our tears, to the Sacred Heart of Jesus Christ, which we celebrate as a solemnity on June 19,” said Bishop Boyea, June 4.

“Indeed, we entrust all our needs to Christ, our righteous judge and prince of peace, in the certain knowledge that he alone can gently shepherd us towards peace, justice and reconciliation for all the people of our beloved land.”

“In doing so, it is also appropriate to seek the assistance of Venerable Father Augustus Tolton during these days of prayer and fasting, and to ask Almighty God to grant the canonization of ‘Good Father Gus’ as a model of saintliness and solidarity in the face of racial injustice and social division.”

Bishop Boyea’s announcement comes only a day after Pope Francis enjoined everyone in the United States to work towards national reconciliation and peace. Speaking during his weekly General Audience in Rome, the Pope prayed for the repose of the soul of the late George Floyd and all those who have lost their lives as a result of the sin of racism.

“We cannot tolerate or turn a blind eye to racism and exclusion in any form and yet claim to defend the sacredness of every human life,” said Pope Francis, while adding that “the violence of recent nights is self-destructive and self-defeating”.

“The Holy Father spoke for all of us when he states that racism is wrong while ‘nothing is gained by violence and so much is lost’,” said Bishop Boyea, “he also reminded us of the great importance of praying for the repose of the soul of George Floyd and for his grieving family. May he rest in peace.”

The dates of the six days of prayer and fasting across the Diocese of Lansing have been chosen to coincide with the lead-up to next month’s anniversary of the Father Augustus Tolton’s death on July 9, 1897. Upon that day this year, Bishop Boyea will offer Holy Mass for the canonization of Venerable Augustus. The next day, Friday, July 10, will conclude the suggested period of prayer and fasting.

Born in 1854 in Missouri, Father Augustus Tolton was ordained to the holy priesthood in the Basilica of St. John Lateran in Rome upon the Easter Vigil of 1886. Upon returning to the United States, he ministered in the Illinois cities of Quincey and Chicago. In each place he met with racial injustice. He is recorded as having countered such bigotry with great virtue and the support of many other Catholics including St. Katharine Drexel (1858 – 1955), the wealthy heiress who became a great pioneer of educational advancement for Native Americans and African Americans.

Father Tolton’s cause of canonization was initiated in 2010 by Archbishop Francis Cardinal George of Chicago. In 2019, Pope Francis granted Father Tolton the title of “Venerable”.

Note: Friday, June 19, is the Solemnity of the Sacred Heart and, thus, a feast day when fasting would not normally be observed. It is therefore suggested that the fast is transferred to the day prior, Thursday, June 18, while the Friday is an occasion to re-dedicate oneself to the Sacred Heart of Jesus.