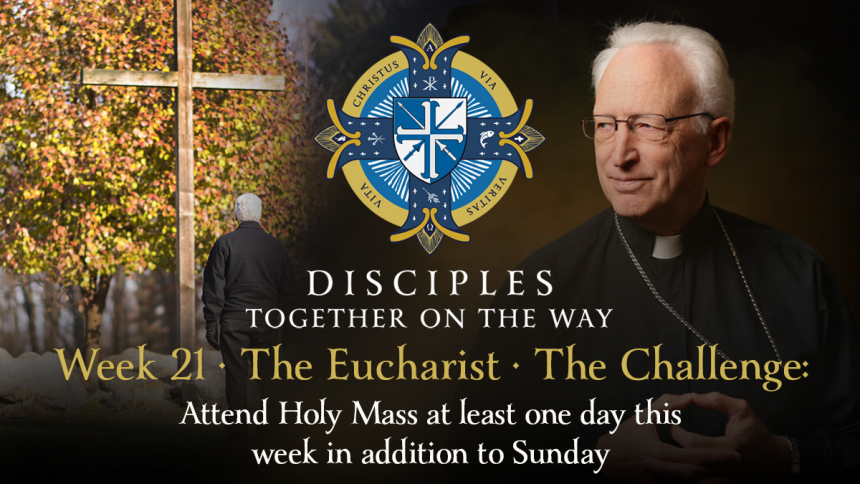 Dear Sisters and Brothers in the Lord,

Charles William Wilson, a noted British geographer and archaeologist, made a very notable discovery 1866 at the historic city of Capernaum in northern Palestine. It was an ancient synagogue, probably dating back to the 3rd or 4th century A.D.

Beneath it, however, was dark basalt stone which, it seemed, belonged to a previous synagogue on the same site. It dated back to the 1st century. All four gospels report that Jesus visited Capernaum and often attended and taught at the city’s synagogue.

So, was Wilson’s discovery the synagogue where Christ preached? If so, he had just uncovered the spot where human history changed forever – as we’ll now find out as Disciples Together on the Way.

The Gospel of John, chapter six, has Jesus teaching in the Synagogue in Capernaum. He speaks about “the bread which has come down from heaven” and then drops this bombshell: “and the bread which I shall give for the life of the world is my flesh.” Wow!

Many objected, “How can this man give us his flesh to eat?” In response Jesus doesn’t back down but, instead, doubles down:

In case you weren’t counting, that was four more uses of each of the words “flesh” and “blood”. The message was pretty clear and, to those assembled, pretty shocking. A “hard saying” they called it. So much so that many of his disciples no longer followed him.

So, what exactly did Christ mean by this “hard saying”? His listeners seemed to be in little doubt. In recent centuries, though, some have attempted to explain his words away as merely symbolic language. However, that is not how the early Church understood them. Take just one example.

Saint Ignatius, the bishop of Antioch in ancient Syria, wrote in a letter to the Church in Rome in the year 110AD, “I have no taste for corruptible food nor for the pleasures of this life. I desire the Bread of God, which is the flesh of Jesus Christ, who was of the seed of David; and for drink I desire his blood, which is love incorruptible” (Letter to the Romans 7:3).

Ignatius repeats these sentiments in other letters. In fact, it was on account of these beliefs, among others, that he went to his martyrdom in Rome.

Now, to be clear, the primary purpose of the Mass is to give proper worship to Almighty God. Unlike the animal sacrifices of the Old Testament, the Mass is a perfect sacrifice as it is the offering of the Son of God to his Father. This sacrifice puts us into right relationship with God as well as with one another. That’s why it is good for Catholics to go to Mass even if, for whatever reason, one cannot receive Holy Communion.

The reception of Our Lord in Holy Communion at Mass is encouraged. Indeed, from earliest times there quickly developed a desire among the faithful to receive Holy Communion daily. For many reasons, over time, this impulse and practice became dimmed. Many Catholics came to see themselves as worthy of Holy Communion no more than once or twice a year.

In 1905, Pope Saint Pius X finally settled the issue in his Decree on Frequent & Daily Reception of Holy Communion, Sacra Tridentina. The Holy Father made clear that it was “the desire of Jesus Christ and of the Church that all the faithful should daily approach the sacred banquet” such that “the faithful, being united to God by means of the Sacrament, may thence derive strength to resist their sensual passions, to cleanse themselves from the stains of daily faults, and to avoid these graver sins to which human frailty is liable.”

And so, to this week’s challenge: to attend Holy Mass at least one day this week in addition to Sunday. If the Holy Eucharist is the “source and summit of the Christian life” – and it is – then daily Mass is the best thing we can do if we truly aspire to be Disciples Together on the Way.

Until next week, may God bless you in the name of the Father and of the Son and of the Holy Spirit. Amen.

Sign up here to get Bishop Boyea's Disciples Together on the Way: 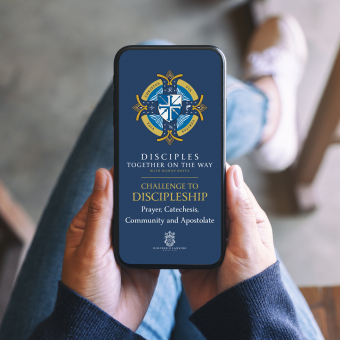 A great way to remind you of Bishop Boyea’s weekly challenge as we grow together as disciples of Jesus Christ.