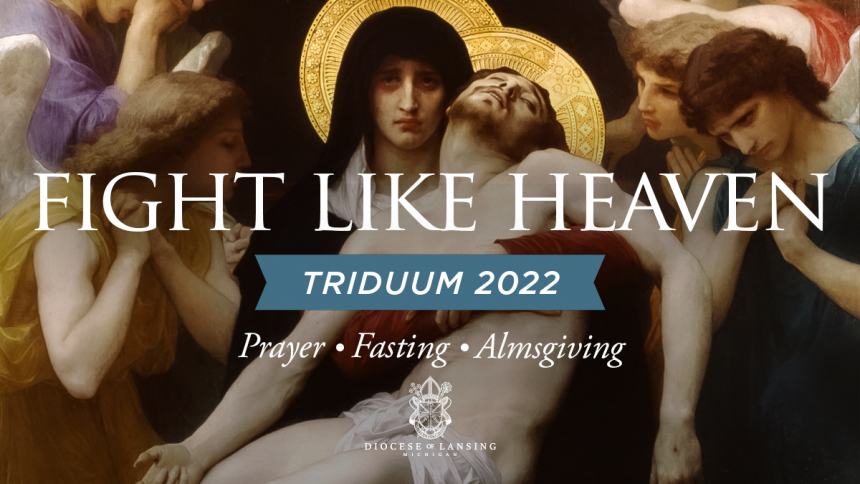 “Fasting is the soul of prayer, mercy is the lifeblood of fasting. Let no one try to separate them; they cannot be separated. If you have only one of them or not all together, you have nothing.” Saint Peter assures us that, “Prayer knocks at the door, fasting obtains, mercy receives.” - St. Peter Chrysologus (5th Century)

On April 7, 2022, Governor Whitmer of Michigan filed a lawsuit asking our state Supreme Court to enshrine abortion as a fundamental right in Michigan's Constitution. She says she will “fight like hell” to prevail in this matter. Bishop Boyea has released a letter in response to Governor Whitmer.

Medical advances have only further confirmed the humanity of the unborn since the 1931 Michigan legislation that protects women and children from abortion was adopted. "The fetal heartbeat can be confirmed as early as six weeks. A 2020 study found that an unborn baby can feel pain as early as 12 weeks. Babies have survived earlier and earlier in pregnancy, with the earliest surviving premature baby being born in the 21st week of pregnancy. And who can deny the unborn infant’s humanity after seeing a 3-D image of your own child or grandchild?

Over the past 50 years, we have also learned that abortion not only takes the unborn child's life, it also harms their mother. We all know of women who feel they were deceived into the belief that abortion was their only option or were even coerced into having an abortion. There are also many women who have later come to regret their abortion, suffering from post-abortion stress syndrome. Yet some still claim that a woman's freedom is dependent upon taking the unborn life of her child. This is as tragic as it is untrue. Women deserve better than abortion." - Bishop Earl Boyea

A Call to Prayer, Fasting and Almsgiving

"In response, I, therefore, call upon all Christians to 'fight like heaven.' What does that entail? First comes love. Heaven is a communion of love. It is that place where faith and hope find their fulfillment yet love abides (1 Corinthians 13:13). Therefore, love has to be our motivation in all we do when responding to this latest legal action: Love for mothers; love for the unborn; love for those who suffer post-abortive trauma; love for the common good; love for all who hold public office including Governor Whitmer and the seven Justices of the Michigan Supreme Court.

Second, to “fight like heaven” also compels us to employ the three great spiritual weapons of the Christian life: Prayer, fasting and almsgiving.

Abortion is never the answer. It is always a failure. There is a better way. Thus, as we begin our Holy Week pilgrimage, let us remain faithful to Christ, even unto Calvary, assured that only his victory come Easter can overcome our present culture of death and hasten a new civilization of love. " - Bishop Earl Boyea

Let us observe a fast from the conclusion of the Lord’s Supper on Holy Thursday through to Mass of the Resurrection of the Lord at the Easter Vigil. This is the traditional fast of the Church upon Holy Week. For us Catholics, Good Friday is also a day of abstinence from meat.

Let us give generously during the three days of the Triduum to pro-life charities and, especially, to those organizations that walk with pregnant mothers by offering authentic compassion and practical support at times of personal and familial crisis.

Abortion is never the answer. It is always a failure. There is a better way.

Thus, as we begin our Holy Week pilgrimage, let us remain faithful to Christ, even unto Calvary, assured that only his victory come Easter can overcome our present culture of death and hasten a new civilization of love.

There is a petition circulating in Michigan that seeks to enshrine abortion as a fundamental right in the State of Michigan. See more on Decline to Sign